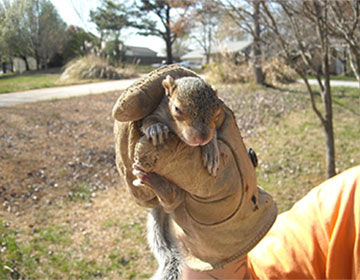 It’s November now and the weather is Cold. Warm. Hot. A little chilly. It’s all over the place… some would say, welcome to Virginia! Squirrels are active as ever scrambling to get their nuts and nests in place for the winter. This also means these rascals are chewing through your roofs and siding to get to a cozy place inside your home for the winter. So, those scratching noises you are hearing? Probably good signs of squirrels in your attics and walls of your home. They will also nest in your chimney. If you are hearing these noises, call us here at Summit Environmental Solutions and we can send out one of our licensed wildlife experts to evaluate the situation at no charge and let you know the best way to evict these fellas. (or Mama’s.)

Meanwhile, here are some interesting facts about squirrels that are pretty fascinating to me and I hope you enjoy them as well.

2) Squirrels can jump vertically five feet and can leap between objects that are over ten feet apart. Given that squirrels are less than 1/10th the size of people, if you could do this, you would be a superhero who could literally jump onto five-story buildings and clear buses and trucks in a single bound.

3) Squirrels can sprint faster than you.

4) Squirrels are good swimmers, although they usually prefer not to.

5) The college I went to had a rare white unicorn squirrel in its central square. I saw it once, and it was one of the best days of my life.

6) In Japan, there are squirrel gardens (where you can pet squirrels with oven mitts).

7) The white fur on the inner thigh of a squirrel is the softest thing you have never touched.

8) Squirrels pull out their tail fur for their young.

9) A squirrel nest is called a drey. It looks like a leafy piñata in a tree, but please don’t hit it with a stick.

10) Squirrels in North America used to migrate in massive numbers, following the cycles of bountiful acorn harvests. When settlers first arrived in this country, they reported squirrels being so thick in the trees above during a migration that they blocked out the sun for days. The best part — squirrels could do most of the journey from the East coast to Indiana without ever touching the ground. But as settlers started to clear the forests, the great squirrel migrations became fragmented. Where squirrels had to cross fields, they were killed in the thousands by coyotes, foxes, and other predators, including people who reported killing hundreds of squirrels per hour with clubs (and getting a penny a pelt). The last great squirrel migration was in 1963 in Wisconsin when a couple million squirrels were seen migrating (and dying on the highway and in lakes). One fisherman reported a wave of squirrels swimming toward his boat and nearly sinking it as they ran over him. Since then, this mass migration behavior has gone extinct.*

11) The Japanese flying squirrel is the cutest thing you have ever seen.

12) Squirrels have been known to gang up and attack much larger animals.