Bat control and removal in Virginia

Are you looking for bat removal in Fairfax, VA? 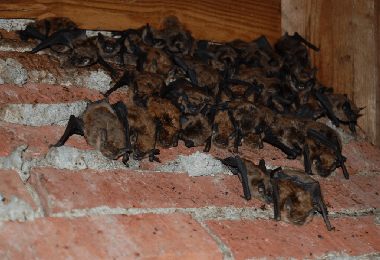 Bats are one of the most misunderstood and astonishing species native to the United States. They are the only mammals that achieve true flight, and those varieties found in Virginia subsist on a diet consisting entirely of insects. In fact, a bat can consume up to 3,000 flying insects in a single evening. Just imagine how crucial it is in controlling those insect species that carry disease and destroy crops!  While having an abundant bat population all around us outside is desirable, having an abundant bat population in our homes, offices, stores, and houses of worship are not. This is when you want to bring in professional bat removal.

Hazards of bats in a living space 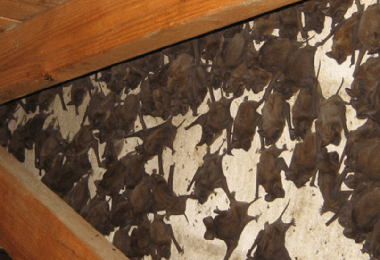 While bats are extremely unlikely to instigate a confrontation with a human, they will defend themselves if they feel trapped, frightened, or endangered. Because bats are one of the most common carriers of rabies in Virginia, any time they are found living in a structure with people, it must be taken very seriously, and bat exclusion and the removal of the colony should be a top priority. If you ever encounter a bat indoors, contact a professional wildlife control company immediately for a bat inspection and emergency bat removal.

Little Brown and Big Brown bats, the two species most common to Virginia, are mating right now, which means the baby season is right around the corner. When female bats are pregnant and raising their young, they often congregate in large maternity roosts, which can result in a huge number of bats all in one place. Once the young are old enough to fly and hunt on their own, it’s safe to evict them their roost.

Summit Environmental Solutions recently had the opportunity to conduct a bat inspection for a church where we discovered, and then humanely excluded, a maternity roost consisting of nearly 100 bats from the bell tower. Talk about bats in the belfry!

If you have a bat problem, call one of our wildlife control experts at 703-520-5868 today to schedule a bat inspection and bat removal. There may be a fee associated with the bat inspection, so be prepared for that.

After receiving a phone call that a church has had seven bats in the structure over the last three weeks, we were pretty concerned as that is a high number of bats found within a living space. We sent one of our licensed wildlife experts to the scene to do an inspection and find out where these little guys were coming from.

We’ve identified a buildup of guano and discovered there’s a gap that exists right between the coping and the brick. This is clearly an entry point which is critical to identify exactly what they are using to get in and out. To ensure we are correct, once the sun sets, we’re going to be trying to identify if this is, in fact, the main entry point for the bats. The reason we’re doing this at night time is the structure’s so large we have to physically identify where the gaps are that the bats are coming in and out of. They are a protected species, so we don’t want to harm the bat whatsoever. They’re protected federally and by the state. You can’t just go and kill bats. You have to exclude them.

Finally, we set up one-way doors just to make sure the bats can come out, but at the same time, they can’t come back in. We need to make sure we close off every single inch of the building to ensure they don’t return. All bats need to gain access into a structure is basically 3/8ths of an inch by 2 inches wide. Not a very large gap at all whatsoever.