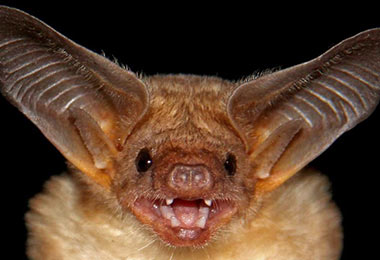 According to the Department of Game & Inland Fisheries:

In Virginia it is illegal to:

It is a Federal offense to:

There are three species of bats in Virginia that are Federally endangered and are therefore protected under the Endangered Species Act which explicitly prohibits anyone from attempting to “harass , harm, pursue, hunt, shoot, wound, kill, trap, capture, or collect, or to attempt to engage in any such conduct” any endangered or threatened species. The three federally endangered species of bat in Virginia are Gray, Indiana, and Virginia Big-Eared. Before implementing any control technique, ensure that your problem bat is not one of these three endangered species.

To help identify the species of bat you may have, use the county occurrence map for each species (also found in DGIF’s “Short Species Booklets“). The county occurrence maps represent counties that have been documented to contain that particular species. The occurrence maps do not indicate the only areas that a particular species may be found but they are a good way to identify the species that you are likely to have. Pay particular attention to the threatened and endangered species, management options may be limited due to federal and state laws.

In Virginia bats are not considered a game species or a fur-bearing species. This means that a bat may be killed if it is deemed as being a nuisance to a homeowner. The Virginia Department of Game and Inland Fisheries (VDGIF) defines nuisance as “species found committing or about to commit depredation upon ornamental or shade trees, agricultural crops, wildlife, livestock or other property or when concentrated in numbers and manners as to constitute a health hazard or other nuisance”. However, the term nuisance does not include animals designated as endangered or threatened. The mere presence of a bat does not constitute it as a nuisance.

Other legal aspects that the homeowner needs to know is that it is illegal to poison any animal (including bats) with the exception of mice and rats found in a dwelling (4VAC15-40-50). It is also illegal to transport any bat species therefore making it illegal to relocate any species of bat other than on the property on which it was caught (4VAC15-30-50).

If a bat is found indoors with people, the Virginia Department of Health recommends capturing the bat and having it tested for rabies. While less than ½ of 1% of all bats actually carry rabies, this is a time for caution. Heavy leather work gloves should be worn if you must handle the bat in any way.

If you find you have bats in your attic or under the eaves, here are some solutions that may help. If you have an area with a large buildup of bat guano (droppings) and you must be in the contaminated space, immediately put on gloves and something to cover your nose and mouth. Bat droppings can harbor histoplasmosis fungi spores and should be cleaned up by a professional. Easy solutions for removing bats include:

The best and only good way to remove bats from a structure is to exclude the bats from the building. If bats are found in a building their access point can be located by viewing the structure in the evenings when the bats vacate to feed. Once the source of entrance is located, the access point can be sealed off to prevent the bats from reentering the structure. It is very important to ensure that all bats have left the structure before closing it off. Another benefit of this technique is that it allows for removal without the homeowner coming in contact with the animal.

Bats are great neighbors to have around the house. One little brown bat has been documented eating upwards of 600 mosquitoes in one hour! Imagine what several individuals flying around in your yard could do!