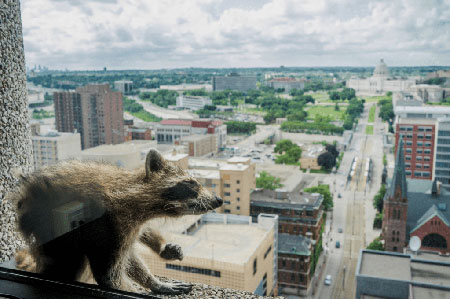 By Matthew Haag and Christina Caron

At first, it looked so defeated: Its head buried between its front paws and its body curled up on a ledge 20 feet above a street in downtown St. Paul.

But this was a raccoon, after all — part of a deceptive and unpredictable family of nocturnal mammals whose panda-like looks lull humans into forgetting they can carry multiple diseases. Nonetheless, three maintenance workers shortly before noon on Tuesday thought they could rouse the raccoon from its stupor and offered it a ladder to climb down from the ledge.

It was the start of a mesmerizing escape — captivating people in Minnesota and then nationwide.

The raccoon, clearly not ready to give up and not a fan of ladders, jolted from the recess of the building, dug its long fingernails into the tan exterior and scurried over to another side. It started to climb and climb and climb. 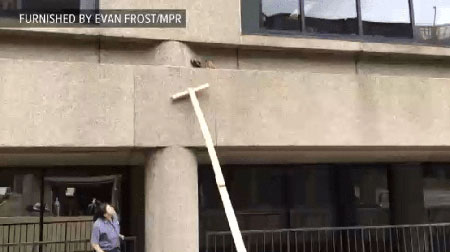 The Minnesota Department of Natural Resources estimates that between 800,000 and one million raccoons live throughout the state.

The raccoon scurried up the side of UBS Plaza, the 15th-tallest building in St. Paul. An audience watched from offices inside and sidewalks below.CreditEvan Frost/Minnesota Public Radio, via Associated Press

The St. Paul raccoon scaled the two-story building with ease. But there was a bigger challenge ahead: the UBS Plaza, a 25-story office tower, and St. Paul’s 15th-tallest building. Within minutes, the raccoon had ascended five stories.

“Well, it’s out of the frying pan, into the fire for the #mprraccoon,” Tim Nelson, a reporter at Minnesota Public Radio News who chronicled its adventure,   with a hashtag that became a trending topic on Twitter.

About 10 minutes later, the raccoon was pressed against the 12th floor, now a mere dark spot between two windows more than 100 feet above the street. Then the raccoon reached the 15th floor and then the 20th.

While it’s normal for raccoons to climb 20 or 30 feet, scaling a large building is very unusual, said Russell L. Burke, a biology professor at Hofstra University.

“That kind of height is extraordinary,” he added.

By the time the raccoon reached the upper stories, it had an audience.

Inside the tower, employees pressed their faces against the windows hoping to catch a glimpse of it. On the 23rd floor of UBS Plaza, Sheila Donnelly-Coyne, a partner at Paige J. Donnelly, a St. Paul law firm, huddled with her co-workers and started to chronicle the raccoon’s journey.

Their thoughts raced. Who will rescue it? Will it fall?

It showed up around 3 p.m. and started pacing on a thin window ledge outside Ms. Donnelly-Coyne’s office. “He just seemed sweet and cute and very mellow,” she said in an interview on Wednesday.

Breaking out a window or sending down window cleaners would have been too risky, Ms. Donnelly-Coyne said, so officials baited live traps with cat food and placed them on the roof. They hoped the smell would lure the animal up another two floors.

Ms. Donnelly-Coyne stayed in the office until 9 p.m., taking breaks from her work to check on the raccoon. When she left, she said, the animal was curled up sleeping. “All they could do was put enough stinky food up there to encourage him to go up the last two floors,” she said. “We were all kind of worried he might be too tired to do so but thankfully the little guy kept going.”

The raccoon awoke around 10:30 p.m. and apparently had a change of heart. It started to descend, down to the 18th floor and then the 17th, before stopping on another ledge.

photographer at Minnesota Public Radio zoomed in and saw the raccoon peering over the ledge. Maybe it saw the cheering crowd below. Maybe it thought the descent was too far. Either way, around 2 a.m. on Wednesday, it began another climb.

It surpassed the 18th floor and then 19th and kept going and going. Around 2:45 a.m., according to Mr. Nelson, it scaled the top and hopped onto the roof. It also found the cat food inside the trap.

After a delicious meal of soft cat food, #mprraccoon has been caught and will be picked up by Wildlife Management. Goodbye, friend!

Hundreds of feet above the street, the raccoon took a break on a window ledge. Credit Evan Frost/Minnesota Public Radio, via Associated Press

Wildlife Management Services, the company that set the traps, retrieved the raccoon on Wednesday morning, said Laurie Brickley, a spokeswoman for the city’s Department of Safety and Inspections.

The raccoon was a female about 2 years old, Ms. Brickley said. “She was a little skinny but in good shape,” she added.

By the time the team reached the animal, it was “incredibly tired,” had eaten all that was in the live trap and had drunk a lot of water, Ms. Brickley said.

Later, the company said on Facebook that the raccoon had been released on private residential property in the suburbs of the Twin Cities with permission from the owner, and after consultation with the Wildlife Rehabilitation Center of Minnesota.

Ms. Donnelly-Coyne arrived at work on Wednesday to hear the good news. “Everybody was very, very relieved this morning,” she said, “that this story had a happy ending.”

Also relieved was her 14-year-old daughter, a vegetarian and animal rights advocate who would have been heartbroken if anything had happened to the raccoon, she said. “I was very happy I was able to tell her the little guy is fine.”

But not everyone was rooting for a peaceful end. Raccoons can be vicious creatures, many people noted online. They attack pets and eat trash. They also carry rabies (though the disease is “quite rare” among Minnesota raccoons, the state says) and a deadly parasite they pass through their feces.