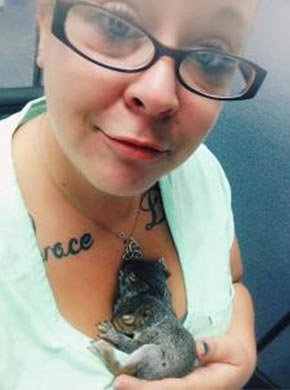 These two baby squirrels find warmth and comfort in the arms of Jessica Munro, Summit Environmental Solutions employee. Their journey to our office was a difficult one indeed. But, thanks to our expert animal control specialists, these two babies were.

What species of squirrel are you dealing with?

When people find young squirrels, whether tiny eyes-closed infants or slightly older eyes-open (but un-weaned) babies, it is usually due to one of 5 scenarios: 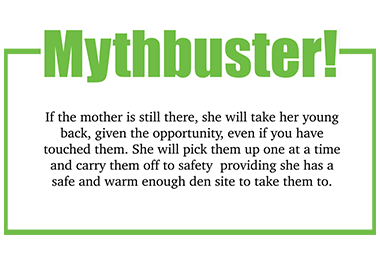 Is the squirrel really an orphan?

Obviously the first scenario means the young are orphaned and in immediate, often desperate need.  Eyes-closed infants will be dehydrated and starving, usually having waited for their mother for a day or more before wiggling out of the nest.  Slightly older eyes-open babies often approach and follow people, even climbing up a pant leg.  Baby squirrels rely on their mother for a long time, weaning gradually after 8 weeks and remaining with mother until 12 weeks of age, so a fluffy little 6 week old, eyes-open baby, although mobile, is still totally dependent.

In the second and third (but only occasionally fourth and fifth) scenarios, the young may still be reunited with their mother, so long as they are not injured (unless the injury is superficial).  One thing to note is that eyes-open babies who have been missing their mother for only hours rather than days (i.e., mom is still nearby) may be more wary than in the first scenario, and not as likely to approach people, because they will not yet be so desperate.

The reason the fourth and fifth scenarios only occasionally lead to a reunion with the mother is that predators are often attracted to unguarded nests of babies, where the mother has already gone missing, or predation itself has caused an injury, and an injured baby should not be returned to its mother.

TAKE CAUTION about “creating” orphans: Squirrels choose warm protected places to have their young, sometimes in and around our dwellings.  Baby squirrels are often “created” orphans when homeowners hire pest control companies to remove the mother.  The best solution for the homeowner and the babies is to leave the mother squirrel alone for a grace period of a few weeks – she will move her young herself once they become mobile and start to venture out of the nest.  At that point it is safe to exclude the entire family and make repairs so the situation does not repeat.  If you have found very young babies (with scant or no fur and eyes closed) and their birth nest has been destroyed or the mother barred entry to it, she may not be able to take the babies elsewhere.  She may not have another nest site safe and warm enough to keep such fragile infants alive.  Therefore if this is the case, if at all possible, try to restore the birth nest in hopes the mother will be able to continue to care for the babies there.  Older, mobile and fully furred youngsters are hardier, and the mother is more likely to have an alternate nest site that will suffice for them in an emergency – and she will often choose to move older babies if the birth nest is threatened.