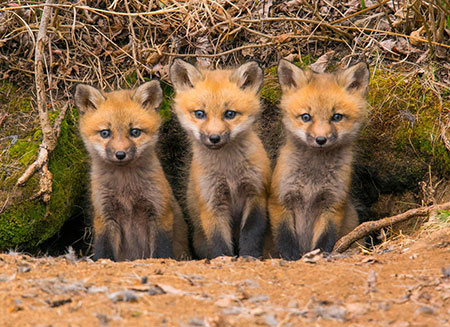 Many residents across the Commonwealth enjoy seeing wildlife in their backyards. Bird feeding and bird watching are popular activities, while others enjoy watching squirrels, deer, or other animals. Not everyone is accustomed to seeing wildlife on their property, however, and the unexpected presence of certain animals can cause concern or even alarm. As the human population continues to grow in Virginia, so too does the number of houses and buildings we need to live. Increased urbanization of areas that were previously undeveloped puts more people in closer contact with wild animals and increases opportunities for human-wildlife conflicts. In other cases, movement of particular species into a new area can push other animals out. For instance, the expansion of coyote populations across the state has likely caused an increase in the number of foxes in urban and suburban areas. Coyotes do not tolerate foxes and often exclude them from traditional rural habitats, forcing them to live in close proximity to humans.

Education and information access are important tools for resolving many issues Virginians have with urban wildlife. Concerned citizens who call local police or animal control are often referred to the Virginia Department of Game and Inland Fisheries (VDGIF). To resolve these wildlife-human conflicts, it’s important for the public to understand real versus perceived risks, know what actions can be taken, and be aware of resources they can utilize for support. Many of the inquiries VDGIF receives about urban wildlife involve a group of animals collectively called furbearers, which are the focus of this document. This group includes fox, raccoon, coyote, bobcat, skunk, opossum, beaver, weasel, mink, nutria, and muskrat.

WHAT HAPPENS TO TRAPPED WILDLIFE?

Unfortunately, nuisance wildlife trapped by homeowners or licensed nuisance animal trappers must be euthanized and not relocated. The reasons for this are many:

Simply put, you would be giving your problem to someone else. If everybody dropped off their trapped wildlife in the city parks or just outside of town there would be an unnatural concentration of animals in these areas that further increases disease risks for wildlife.

Contact Summit Environmental Solutions for all your wildlife removal and trapping needs at 703-520-5868.