What temperatures can bats withstand?

Bats require specific temperatures for hibernation ranging from 35-40 degrees Fahrenheit. Big Brown bats have figured out that attics can provide the perfect temperature for survival and have adapted to hibernating in attics rather than caves. If the hibernacula (place of hibernation) temperature is too warm, then they expend too much energy.

How do professionals remove bats from your home 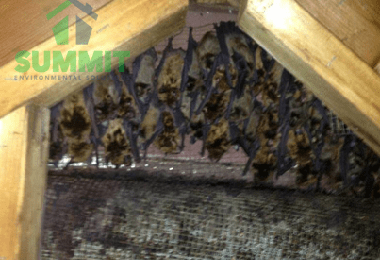 Do bats awaken during hibernation? 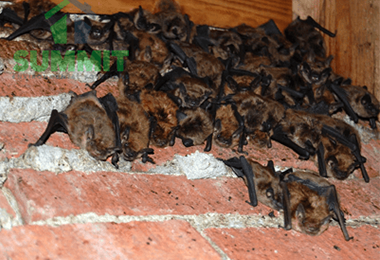 This time of year, millions of bats from a spectrum of species are hunkered down in caves, where they‘ll huddle together for warmth and hibernate through the winter. Hibernating animals have to emerge from sleep once every few days to move around, eat some of their stored food and urinate and defecate when necessary.

Do bats leave the attic for the winter?

Bats will sometimes appear in your home during the winter months. They hibernate from late fall (October/November) until spring arrives (March/April). It was previously believed bats migrated to caves or mines for hibernation, but we now know many will hibernate inside homes and buildings.

Where do bats go during the day? 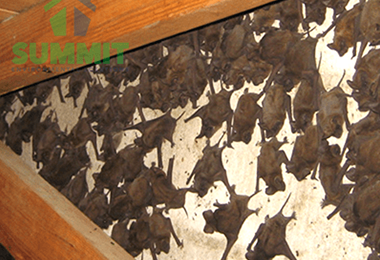 During the day bats sleep in trees, rock crevices, caves, and buildings.Bats are nocturnal (active at night), leaving daytime roosts at dusk. Upon leaving their roost, bat fly to a stream, pond, or lake where they dip their lower jaw into the water while still in flight and take a drink.

Bats are associated with diseases, including rabies. In addition, their droppings, called “guano,” can contaminate the soil with a fungus that causes Histoplasmosis, according to the Centers for Disease Control and Prevention

Bats aren’t the most common pest problem, but they still plague plenty of homeowners… On the other hand, if bats cause sudden and accidental physical damage that’s covered under your homeowner’s insurance, your policy could kick in to help pay for repairs — but not the removal of the bats themselves.

What will repel bats?

Are bats afraid of the light?

Bats are definitely not blind but don't have perfect vision. They also avoid both natural and artificial lights. Being nocturnal animals, they have adapted to extremely low light conditions. Whenbatsare in flight during the night, they are conscious of artificial lights and avoid them as much as they can.

Do bats come back to the same place?

Some bats leave for the winter, but most hibernate in their nest. In April, these same bats return to their nesting places. If the bats have a nest in your home, they will return to the same spot, year after year.

How do bats communicate?

Bats communicate with their environment mostly by using their biological sonar. By emitting high-pitched sounds through their mouth or nose, bats use echolocation by intercepting with their ears the echoes that come back once the sound waves they produce bounce off the objects found in their surroundings.

When cold weather drives insects away, bats must choose to hunker down and hibernate or migrate to warmer areas with the more abundant food supply. Some bat species hibernate, some migrate, and some do both. And in temperate climates, like Florida, bats may be able to stay year round.

Can a bat live in a house?

Some species of bats prefer to live in houses — the same houses that people occupy. Bats live in walls and attic spaces because they make great places to hibernate or raise their young. Occasionally, a bat will in advertently get inside the living quarters, such as a bedroom.

Vampire bats do no tattack humans or suck our blood; they prefer to get their teaspoon-sized meals from other animals. The remaining 1097 or so species of bats eat insects, fruit, nectar, and pollen. A few species eat fish and frogs. Insect-eating bats eat billions of tons of insects each summer.

How much does it cost to get bats removed from your home?

The cost of wildlife removal from a home varies greatly depending on the extent of the infestation and the size of a home. Removing a single bat with a single entry or exit point may not be very costly. However, taking care of an entire colony will be much more.

Ask nearly anyone, and you’ll hear that bats(although beneficial in insect control) can be dangerous because they carry rabies. But a lesser-known danger and one that is not as easy to avoid is histoplasmosis. Histoplasmosis is a disease you can get from exposure to bat guano (bat droppings).

Can bats see during the day?

Bats are not blind. The saying “blind as a bat”, simply isn’t correct. The truth is that all 1,100 bat species can see and often their vision is pretty good, although not as excellent as many other night-hunting animals. They actually rely on their daylight vision and cannot fly during moonless nights.

Is a bat considered a bird?

Bats are very special mammals. Bats flap their wings and fly like a bird but are not birds.

How small a hole can bats get into?

They can squeeze through holes as small as 6 millimeter sor about the size of a dime. Once inside the structure, bats will roost in attics and between walls.

For more information about bats and our safe, legal and effective methods of bat removal in Northern Virginia, contact us today.