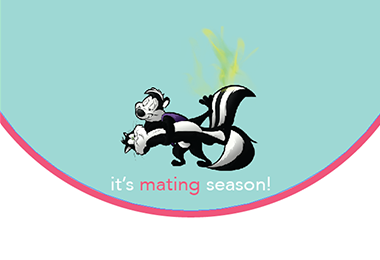 Because of Valentine's Day, February is a significant month for couples in love. It's also the height of mating season for skunks, raccoons and other woodland creatures!

That is especially significant if your home turns into a meeting and mating location for skunks. Even if you don't spot them initially, you will start smelling the rancid stench of baby skunks who are unable to control their ‘stink muscles’ after they are born. You want to stop a skunk infestation early, because the animals can damage your home with their odor as well as their droppings and chewing habits.

February is the beginning of mating season. This also means we have raccoons and skunks looking for a nice, warm place to make a nest for their young. There will be an increase of home invasions in the attic as this is where Raccoons prefer to have their pups. And, skunks will make a den under your deck, porch, or storage building.

Skunks give birth to four to seven mouse-sized young. These baby polecats are born 62 days later in May. Skunks may have multiple mates and males do not help raise young. Skunks use dens to give birth and raise young. They either dig their own or enlarge an existing den, such as a groundhog burrow. Skunks are weaned after two months and the young skunks follow their mother for the first few months before going off on their own in fall. Baby skunks begin producing their recognizable musk at 8 days old and have no control over the release of this familiar smell.

Skunks are an opportunistic omnivore, eating just about any vegetable, animal or insect that it can get its paws on. However, much of their food consists of invertebrates, and they may make distinctive conical holes in a mowed yard to get at worms or grubs. Primary foods include:

Pro tip: Properly secure all garbage and food waste to deter raccoons from hanging around your home or property.

Watch the following videos regarding skunks and raccoons. If you encounter a problem with either or both, please call Summit Environmental Solutions for their immediate, safe, removal at 703-551-4602