If you are having issues with squirrels in the attic and need squirrel control, please call Summit Environmental Solutions to schedule a free inspection and squirrel removal. 703-520-5868

1. They can jump very far 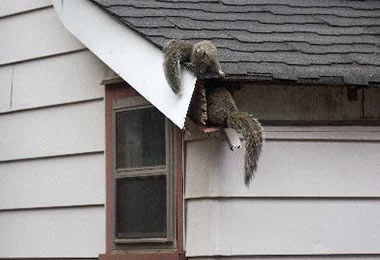 Tree-dwelling plantain squirrels that roam the campus of the National University of Singapore, squirrels were observed jumping almost 10 feet at a stretch. In another study with the eastern ground squirrel, one researcher observed a squirrel jumping more than 8 feet between a tree stump and a feeding platform, propelling itself 10 times the length of its body. Flying squirrels, obviously, can traverse much farther distances midair—the northern flying squirrel, for instance, can glide up to 295 feet.

In fact, they may be more organized than you are. A recent study found that eastern fox squirrels living on UC Berkeley’s campus cache their nuts according to type. When given a mixture of walnuts, pecans, almonds, and hazelnuts, the squirrels took the time to hide each type of nut in a specific place. This method of “spatial chunking” may help them remember where the nuts are when they go to retrieve them later. Though the study wasn’t able to determine this for sure, the study’s results suggested that the squirrels may have been organizing their caches by even more subtle categories, like the size of the nuts.

Tree squirrels are one of the most important animals around when it comes to planting forests. Though they may be careful about where they bury their acorns and other nuts, they still forget about quite a few of their caches (or at least neglect to retrieve them). When they do, those acorns often sprout, resulting in more trees—and eventually, yet more acorns for the squirrels.

The squirrel digestive system also plays an important role in the survival of truffles. While above-ground mushrooms can spread their spores through the air, truffles grow below ground. Instead of relying on the air, they depend on hungry animals like squirrels to spread their spores to host plants elsewhere. The northern flying squirrel, found in forests across North America, depends largely on the buried fungi to make up its diet and plays a major role in truffle propagation. The squirrels poop out the spores unharmed on the forest floor, allowing the fungi to take hold and form a symbiotic relationship with the tree roots it’s dropped near.

5. They’re one of the few mammals that can sprint down a tree head-first

You may not be too impressed when you see a squirrel running down a tree, but they’re actually accomplishing a major feat. Most animals can’t climb vertically down head-first, but squirrel’s back ankles can rotate 180°, turning their paws all the way around to grip the tree trunk as they descend.

6. Several towns compete for the title of ‘home of the white squirrel’

Squirrels are a more popular town mascot than you might think. Surprisingly, more than one town wants to be known as the “home of the white squirrel,” including Kenton, Tennessee; Marionville, Missouri; the Canadian city of Exeter, Ontario; and Brevard, North Carolina, the location of the annual White Squirrel Festival. But Olney, Illinois may be the most intense about its high population of albino squirrels. There is a $750 fine for killing the all-white animals, and they have the legal right-of-way on roads. There’s an official city count of the squirrels each year, and in 1997, realizing that local cats posed a threat to the beloved rodent residents, the city council banned residents from letting their cats run loose outdoors. In 2002, the city held a 100-Year White Squirrel Celebration, erecting a monument and holding a “squirrel blessing” by a priest. Police officers wore special squirrel-themed patches for the event.

7. They can aid in stroke research

Ground squirrels hibernate in the winter, and the way their brains function while they do may help scientists develop a new drug that can limit the brain damage caused by strokes. When ground squirrels hibernate, their core body temperature drops dramatically—in the case of the arctic ground squirrel, to as low as 26.7°F, possibly the lowest body temperature of any mammal on Earth. During this extra-cold hibernation, a squirrel’s brain undergoes cellular changes that help its brain deal with reduced blood flow. Researchers are currently trying to develop a drug that could mimic that process in the human brain, preventing brain cells from dying when blood flow to the brain is cut off during a stroke.