All about the North American Red Fox 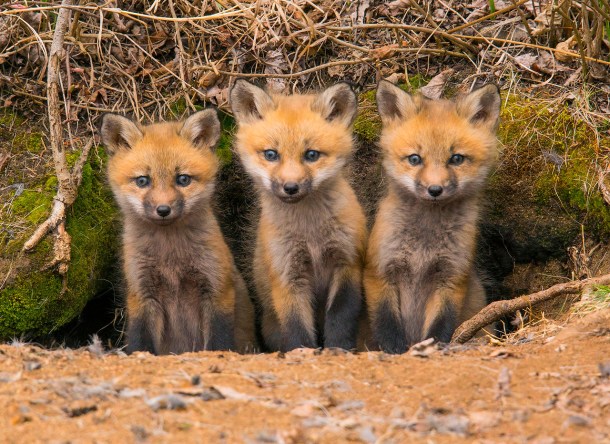 Red foxes have reddish-brown fur, with white underparts with long bushy tails that have a white tip. Their ears are back and parts of their legs are also black. As the temperature cools off in the fall and winter, foxes will grow more fur than usual, typically referred to as their winter fur. When spring arrives, the fur sheds and prepares them for the hot summer. The fox has a thin and slender muzzle with white fur on top as well as on their chests. Foxes have strong and powerful legs which allow them to run quickly, either after prey or away from predators, often reaching speeds of up to 30 miles per hour. Because of unusual dental spacing, foxes are unable to bear their fangs like other members of the canid family. Foxes can reach lengths of 18 to 34 inches with 12 to 21 inch long tails and can between seven and 24 pounds when they reach adulthood. The size of a fox can be estimated from the size of their tracks. The red fox can live in the wild for about three years and can live in captivity for 12 to 18 years.

In Northern Virginia, the red fox makes its den in forested, suburban or even urban areas. They are incredibly resourceful and can adapt for various living environments. Red foxes are found all through the state of Virginia with the exception of the far southeastern region. Foxes will claim territories, which are plots of land in which they have their dens and food sources. Foxes can have multiple dens that are connected with tunnels. The extra dens are used for storing food, giving birth in, raising the young, escaping predators and for other emergency purposes.

Red foxes are omnivores mostly eating small rodents, birds, insects, berries, sea creatures and dead animal carcasses. They have been known to kill and eat baby deer and sheep. Foxes will eat approximately one to two pounds of food a day. Foxes have a great sense of hearing and it allows them ability to be skillful and resourceful hunters. Foxes will often bury their extra food to eat at a later time.

Foxes, especially foxes in heavily populated or urban areas are most active during the evening hours. They are solitary for the most part and hunt on their own. Foxes are able to communicate through their body language and with the different sounds they make. Foxes are capable of making a variety of different noises ranging from screams to barks and each having a different meaning or reason for use.  Some of the sounds foxes make can be quite alarming and be mistaken for people screaming. Foxes can also communicate through their markings and scents that establish their territories.

The fox mating season is between December and February. Monogamous mating pairs form each winter and remain together to co-parent the pups once they arrive. Foxes have litters of about four to 13 kits that are born blind and weigh less than half a pound. After giving birth, the female fox stays in the den with her kits and nurses them while the male fox will hunt and gather for his partner. Once the kits are two weeks old, their eyes will open for the first time. At five weeks, the kits will leave their den and explore outside. By 10 weeks, they are weaned from their mother and eating solid food. When they are approximately eight to 10 months old, they will leave their den permanently and begin to form their own den and mate.

Red foxes are not considered an endangered species, in fact there are so many in the United States, they are the most prevalent species of fox. Foxes have short lifespans because of vehicles hitting them, not finding enough food to survive and getting diseases such as rabies and mange. Baby foxes are especially prone to starvation, because they don’t have fat deposits saved up and if they are not constantly fed they will starve and die.

Foxes are considered a pest by many farmers because they will kill livestock such as sheep, rabbits and chickens. When foxes are in residential areas, often homeowners will get scared and be concerned for the health and safety of their family and pets. Foxes often will kill and eat small dogs and cats and can even attack small children. For the most part, foxes are shy and will stay away from areas where there’s a lot of human activity. Foxes can make life challenging for some homeowners because their noises can cause frustration and they can also tear up yards and gardens in the princess of making their dens and finding food sources.

If you have foxes on your property in Fairfax, Alexandria, Arlington or other parts of Northern Virginia, contact us today at Summit Wildlife Removal for information about our removal services for foxes and other wild animals. With foxes, our traditional methods of trapping and removal can prove to be insufficient so the best thing to do in that circumstance is to exclude them from your property. With exclusion, that usually means limiting their entry points, food source or making it difficult or impossible for them to dig and den on the property. Wildlife barrier walls have proven to be successful in decreasing fox activity in the yards of some of our clients. For more information or to schedule a free estimate for fox exclusion, contact us today.