Chill out! Warm up! How do animals survive the temperature changes? 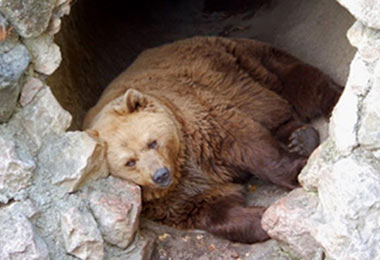 Animals have some amazing adaptations that help them live in even the most hostile environments. Consider camels, for instance. They can thrive in some of the hottest and driest places on Earth. Their legs don’t get burned when they kneel on hot sand due to thick leathery patches on their knees. They can survive for an entire week without water but, at the same time, they can drink 32 gallons of water at once. Their body temperature ranges from 93 °F to 107 °F, so they don’t need to sweat very often and can conserve water this way. The spongy bones in their noses absorb any excess moisture to keep every drop of water in, so the air they breathe out is dry air. In addition to camels, other animals’ adaptations are equally remarkable. How do they do it? Chemistry helps!

The most important adaptation is how animals regulate their body temperature. Animals can be either warm-blooded or cold-blooded.

In most instances, the size and shape of an organism dictate whether it will be warm-blooded or cold-blooded. Think about some large animals—elephants, whales, and walruses. Their volume is so large that relying on the outside environment to heat them up would be inefficient and would slow their response times, putting their survival at risk. For that reason, nearly all large animals are warm-blooded.

What about all the birds and mammals that are not large, such as mice and sparrows?  The other factor—body shape—comes into play here. Small warm-blooded animals tend to have a rounded shape, which ensures that the interior of an organism stays warm the longest time possible. Most cold-blooded organisms have either an elongated or a flat shape. If you look at a typical fish, their bodies tend to be flat when viewed head-on from the front. Snakes, lizards, and worms tend to be long and slender. These shapes ensure they can heat up and cool down rapidly.

There are exceptions but, overall, this rule holds true, for the following reason: As the volume of an object decreases, the ratio of its surface area to its volume increases. In other words, the smaller an animal is, the higher the surface area-to-volume ratio. These animals lose heat relatively quickly and cool down faster, so they are more likely to be found in warmer climates. Larger animals, on the other hand, have lower surface area-to-volume ratios and lose heat more slowly, so and they are more likely to be found in colder climates.

This energy produced by warm-blooded animals mostly comes from food. Food represents stored chemical energy (potential energy), which is converted into other forms of energy within the body when the food is metabolized. Metabolism refers to the all of a body’s chemical reactions.

For a warm-blooded animal, food is not just a luxury—it is a matter of life and death. If food is not available for energy, the body’s fat is burned. Once fat reserves are used up, death is imminent if a food source is not found. The smaller the warm-blooded animal, the more it must eat—relative to its body size—to keep its internal furnace stoked. That’s why most songbirds fly south for the winter.

On the other hand, cold-blooded animals require less energy to survive than warm-blooded animals do, because much of the energy that drives their metabolism comes from their surroundings. It is common to see turtles basking in the sun on rocks and logs. They are not trying to get a suntan, but rather are revving up their metabolism. The sun gives them an energy boost. Muscle activity in cold-blooded animals depends on chemical reactions, which run quickly when it is hot and slowly when it is cold (because the reacting molecules move faster when temperature increases).

Some reptiles, such as the python, can go a year without eating, because they do not use food to produce body heat. And if they lie still, they use little energy, so they can afford to eat little.

For warm-blooded animals that don’t migrate, one way to survive the winter is to sleep through it. Hibernation is a great strategy that enables animals to conserve energy when food is scarce. During hibernation, body temperature drops, breathing and heart rate slows, and most of the body’s metabolic functions are put on hold in a state of quasi-suspended animation.

It is almost as if the warm-blooded animal becomes cold-blooded, as its body temperature drops considerably. But they are still alive, and they live off their fat reserves. Hibernation for extended periods of time is only accomplished by those animals that can store a great deal of body fat, such as bears, groundhogs, and chipmunks. A black bear loses 15%–30% of its weight while hibernating.

Cold-blooded animals hibernate, too. But they need to store less fat than warm-blooded animals because they require less energy. Turtles and frogs bury themselves in mud under lakes and ponds for up to six months at a time, and for all practical purposes, they appear dead. There are no external signs of life.

When many cold-blooded animals hibernate, something interesting happens at the cellular level. The fluid around the cells, but not in the cells, is frozen solid. As water freezes outside the cell, water from within the cell is drawn out through osmosis. Osmosis is a process in which water moves across a semipermeable membrane—in this case, the cell membrane—from an area of low solute concentration to an area of high solute concentration.